You are here: Home1 / revision tips

For #TBT, I’m digging into the radio archives. When I was a pup and still finding my voice, I worked for a Boston radio station as the producer of a morning show. This picture is from 1995-ish. I’m in the green. Next to me: morning show host Gary Dickson, the incredibly talented Moneen Daley Harte, and, yes, Tony Randall (google him, kids). 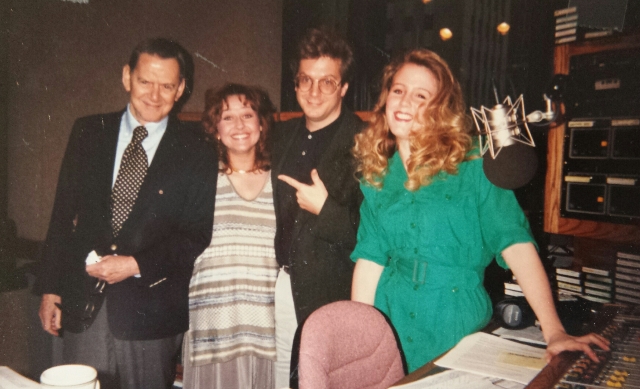 One of my many tasks included editing down long interviews (think 10 to 15 minutes) to 90 seconds. This was the best instruction a future writer could ever get on the subject of revision. My boss, Don Kelley, would remind me whenever I was whining that I couldn’t possibly cut out one more thing (because it was SO IMPORTANT) that only I would know what I cut…the audience wouldn’t. My job was to stitch together a pithy and fast moving story.

The lesson served me well. I now love revising and “killing my darlings,” all in an effort to create the most compelling story possible.

All that said, I know revision can be challenging for some writers, especially major developmental revisions (we’re talking story gutting, not tidying up prose).

1. Walk away. This isn’t a revelation. Probably every book on the writing craft talks about shelving a piece for a series of days, weeks, months, even years. Time brings perspective. This is probably the hardest tip (even for me) because when writers finish a story, the temptation is to share it RIGHT AWAY, which makes sense.

Most writers I know WANT readers. And, of course, there’s nothing wrong with sharing your work-in-progress with some trusted readers to get feedback. The problem is when you send it out prematurely to EVERYONE. Meaning, you self-publish it too soon or you query that agent before it’s ready.

Put the bloody thing away and let the wounds heal. Then, go back and re-read it with a fresh and ruthless eye. If you still think it’s ready, OK. But more often than not (if you’re being true to yourself and the story), you’ll see some stuff that needs fixing. It might be minor stuff. It might be major stuff. Either way, fix it.

2. Do something drastic. When a piece is NOT working, I’ll often do something drastic, like start over. I’ve tossed completed, polished 100,000-word manuscripts out the window and started anew. (And I’ve not regretted it yet.) Or I might just “play” a little with an idea. Write a scene from another character’s POV or try a scene in third person instead of first or draft a chapter in present tense as opposed to past, just to see how it feels. Often, I’ll abandon these writing exercises, but the exercise is enough to get me going again. And sometimes the exercise leads to a major breakthrough.

3. Do something even more drastic. The drastic stuff I referenced above has to do with the way you’re telling the story (e.g. past tense or present tense). But sometimes what you need to do is completely turn the story itself (I’m talking plot) upside down and inside out.

What I’ll do is ask myself crazy what-if questions. Like, what if the good guy is really the bad guy? How would that affect this story? Or what if this person isn’t really dead…what then? These questions are enough to make a writer want to puke because once you start going down this rabbit hole, you see how incredibly involved and painful it would be to not only start over, but also start over with a completely different story. But sometimes that’s exactly what you need to do.

4. Start something else. When you walk away, depending on how long you walk away for, you might turn to something else — another idea that’s been nipping at the edges of your brain. And that’s great! You work on this new idea for a few days or weeks or whatever and then you return to your work-in-progress.

5. Seek out some trusted guidance. Another challenge facing writers is finding people who can provide constructive feedback that compels you to move forward instead of crushing you like a cockroach on peeling linoleum.

Working with a developmental editor can be beneficial, provided you find someone who is a good match (and provided you have the funds — they’re not cheap). Critique groups can potentially be a good source (I say “potentially” because not all critique groups are created equal). It’s hard to have friends, family, or lovers read your work and provide constructive feedback. Whenever possible, I recommend seeking an objective third party who understands story structure, style, and voice. (Again, this will cost money, but it’s worth it…and can save friendships and marriages.)

6. Embrace the mess. There’s no such thing as “neat revising.” Yes, the result — the revision itself — might appear seamless and neat, but to get there? MESSY. Don’t try to fight the mess. (I know this can be hard.)

7. Give up. Don’t give up. The choice is yours. OK, if you’re under contract, you might have no choice but to face the Big Hairy Revision Monster (and even then, there are options). It’s easy for me to say don’t give up, but sometimes giving up IS EXACTLY WHAT YOU NEED TO DO.

If you’re a “real” writer (and I hate saying that, but it’s true in this case), you won’t let the Big Hairy Revision Monster scare you away from writing forever. You’ll start something else, like I suggested in #4, or you’ll take a break from writing for a bit and do something else. And maybe you’ll even come back to the thing you had to abandon…or maybe you won’t. Either is OK. Giving up on a story isn’t necessarily a sign of defeat. Sometimes it’s the wisest move you can make.

I’ve faced many Big Hairy Revision Monsters, and I imagine you have as well. There are more out there, no doubt. Wishing you much luck. Go get ’em.

And if I ever start a band, I’m going to call it “RB & the Big Hairy Revision Monsters.” 🙂

Getting rid of word turds is a big part of my revision process. Because, let’s face it: word turds can stink up your writing. Think flabby, unnecessary words like “very” and “just.” Think overused directional words like “glanced” and “looked.” Think of your own word crutches.

For one of my earlier books, I overused the word “shiver.” I mean, everyone shivered at some point in the story (the whole mystery thingie), and sometimes multiple times. For my current book, I recently caught on to words like “burst” (e.g. he “burst” into the room) and “exhausted.” Nothing is wrong with those words per se. In fact, “burst” is a great action verb, but how much bursting can people do in one book? Too much bursting and you go from apt word choice to word turd.

After doing the “big gutting” — rewriting whole sections, diving deeper into characters, reviewing and revising for pacing and form — I always go through my word turds. I have a running list of over 100 words that I overuse as I draft. There’s a picture of it below, coffee-stained and doodled on. (And I’m sure there are more than 100. I’m constantly adding to the list when a new word turd reveals itself to me.) 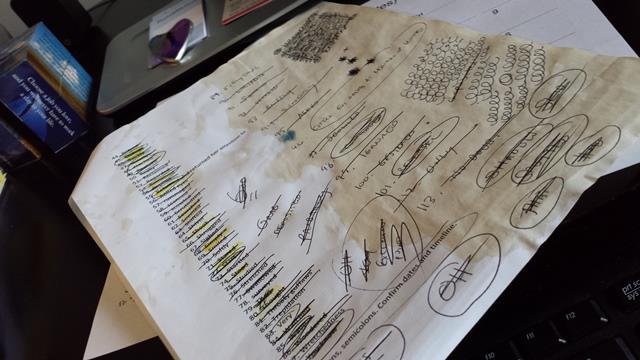 Why do I do this? Well, words matter. I realize this isn’t a revelation. I mean, I’m writing a novel, after all, so of course the words matter. But they matter in ways so many of us don’t even realize as we’re reading. Words affect rhythm. Mood. Character. (One of the biggest challenges I face when writing a novel from multiple viewpoints is making sure the different character voices actually sound different.) And it’s amazing how the overuse of a word can affect the reading.

A few years ago, I read a book where the main character “scowled” so much that was all I could see. The word “scowled” became such a distraction, I even stopped reading at one point to flip back and count how many scowls had been used. It’s the main thing I remember now about the story. (And this was a traditionally published book.) The editor should have caught that because we’re talking excessive use.

Anyhow, my word turd list forces me to exorcise many unnecessary words and it often forces me to re-think and re-cast chunks of text.

I put a word, like “glance,” into the “find” function in Word. This immediately brings up a left-hand sidebar with all the instances of the word “glance.” (Actually, for a word like glance, I’d enter “glanc” into Word, since that would picked up the words glance, glanced, and glancing.) See the screen shot below. And, no. This isn’t the new book. 🙂 (It’s from Granite Creek.) 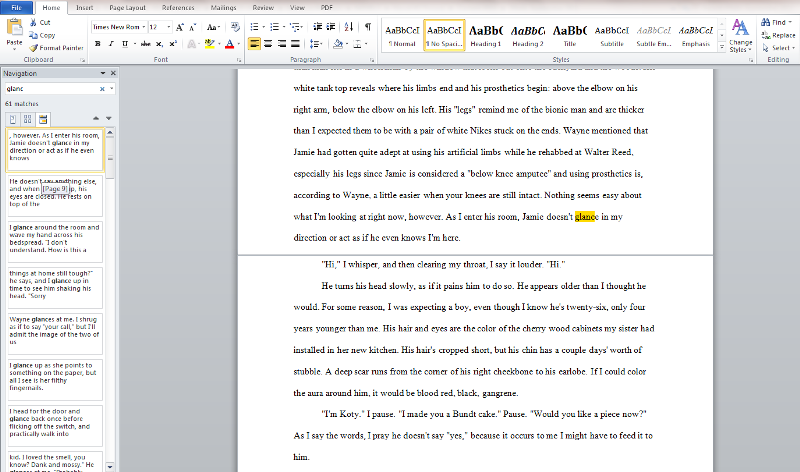 From there, I go through each instance of the word. I read what’s around it. Reading out of context is great because it forces me to catch things I might miss if I were simply reading forwards. Sometimes the word stays. Sometimes it doesn’t. Sometimes it stays, but I completely gut the section and make it stronger.

I do this for each word on the list.

By the time I’m done, the writing is much tighter. During my most recent Word Turd Exorcism, I lost over 1000 words from the manuscript (and the manuscript was short to begin with, 62,000 words). Everything got a lot tighter, a lot smoother.

There you have it. So tell me, fellow scribblers: what are some of your own common word turds? Share in the comments. (No judging!)